It is the day after Chanel’s 2020 Fall/Winter Ready-to-Wear show at Le Grand Palais in Paris, and I am very privileged to visit with the artists who’ve spent hours crafting the looks.

The entrance is inconspicuous. The building, non-descript. But behind these steel grey doors toil some of Paris’s most skilled craftspeople.

Intricate embroidery that would impress the Empress Dowager Cixi? Check. Decadent featherwork fit for Freya’s coat? You bet. A jewellery foundry that would have been on Cleopatra’s speed dial? You have come to the right place.
The place is called Paraffection, a subsidiary of Chanel, comprised of a dozen independent ateliers. Each has a specialty: embroidery, millinery, knitwear, feathers, shoemaking, buttons, artificial flowers, gold-smithing, glove making, pleat-making and more. Together, they put the haute in couture, elevating fashion with their handcraftsmanship. 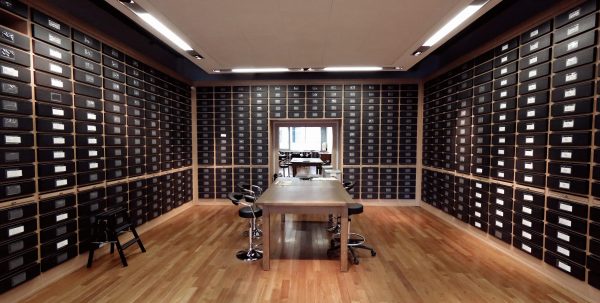 The archives at Maison Lesage hold 75,000 samples. It is the largest collection of couture embroidery in the world, providing an inexhaustible source of inspiration.

Many of these ateliers were established as early as the 19th century, and some worked directly with Gabrielle “Coco” Chanel since the 1950s. Unfortunately, their hallowed heritage is threatened. Some estimate that more than half of France’s traditional craftsmen have no successors, and their art could be lost in as little as one generation. In order to sustain and protect these ateliers, the fashion house has taken them under its wings. Moreover, in the spirit of fostering innovation, creativity and independence, they are free to work for rival brands as well. 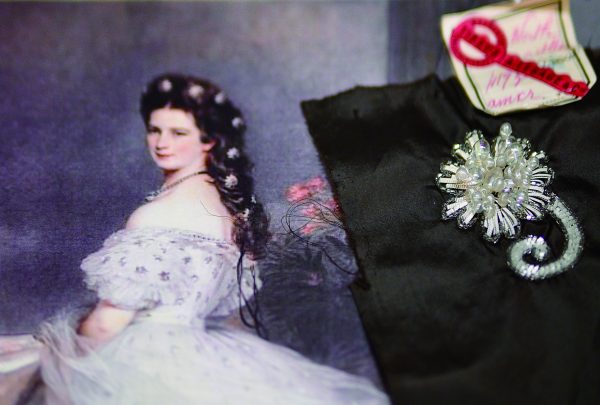 At Lesage, design inspiration can come from the art directors at fashion houses, or from travels and museums around the world. This pattern is inspired by Sissi, Empress of Austria and Queen of Hungary.

This may sound like a beautiful arrangement, but it also means things canget quite intense leading up to Paris Fashion Week—multiple houses may commission work from the same group of artists, and the deadlines are all within the same week. Tales abound when buttons and trimmings are still being sewn on as the model steps onto the catwalk. Luckily for me, today is the last day of fashion week and the atmosphere is decidedly more leisurely. However, they know this is the calm before the next storm —when the orders come in.

For Chanel, boutiques have only one week after the show to place their orders. The buying decision is left up to the buyer for each boutique, who should know what would appeal to its particular clientele. This explains why there are two Chanel boutiques on rue de Cambon—one at No. 19 and another at No. 31. The merchandise is curated differently, offering two different shopping experiences. (On a sidenote: No. 31 is the only place in the world where your shopping comes in white boxes and bags.) 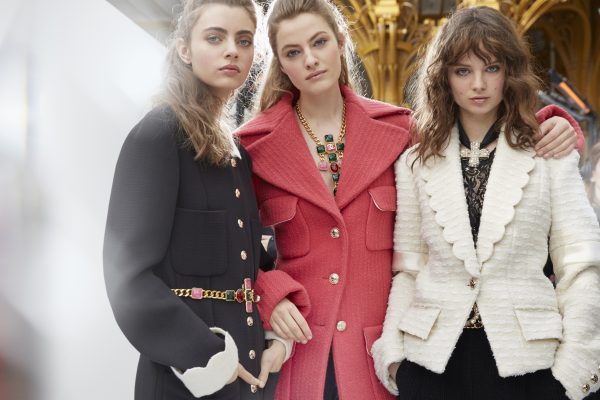 Once the order is received, the artists get to work immediately. The fall/winter show is in early March, and items are in stores by September. You may think six months seems plenty, but consider this: the yoke and armband for “look 47” in this collection is composed of 100 metres of chenille and more than 16,000 cuvettes attached, using the ancestral French technique of Lunéville crochet.

It takes the skilled artisans at Maison Lesage, which specializes in embroidery and creating elaborate tweed weaves, 180 hours to complete their work. That’s more or less a whole month based on a 40-hour work week. And don’t forget, these are small workshops, not big factories. To put things into scale, there are only 75 embroiderers at Lesage, and there are 205 Chanel boutiques around the world. 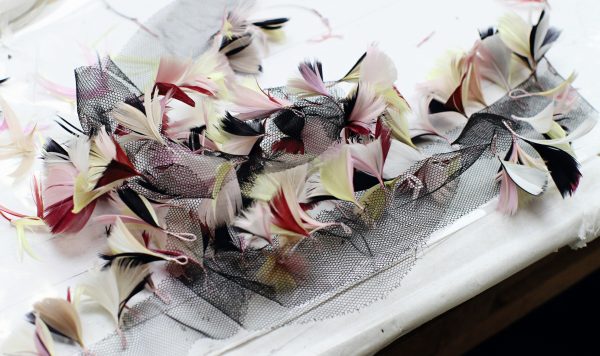 When the House of Lemarié was established in 1880 by Palmyre Coyette, it was one of 300 plumassiers in Paris at the time. Now, they are one of the last feather workers in the world.

Next door Maison Lesage is Maison Lemarié. Founded in 1880, it is one of the last plumassiers (feather-workers) and florists in the world, and they are also experts in couture pleating and smocking. Chanel fans will surely recognize the
camellia, one of their most representative products. One may not think much about how they come to be, but after watching an artist stamp out the form, curl each petal with a balling tool and assemble it layer upon layer, there is a
newfound respect for that little white flower. 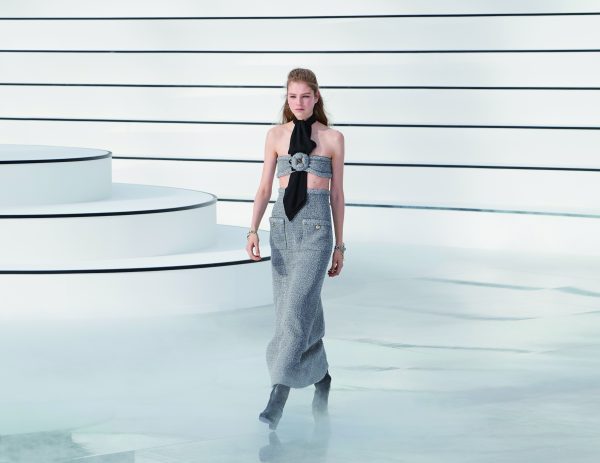 Maison Lemarié is famous for creating every single Chanel camellia flower, averaging 25,000 a year. The bejewelled grey tweed camellia adorning this look at the Fall-Winter 2020/21 Ready-to-Wear show takes three hours for the artisans to make, while the classic camellia with 16 petals typically takes half the time.

The house also creates smocks, pleats, inlays and sophisticated ruffles. For the latest collection, the highlight is a jacket in ecru tweed with majestic sleeves trimmed with feathers, a neckline of a blouse in poplin, combining feathers with thin strips of chiffon and silk charmeuse. If you think embroidery is difficult, wait till you visit the feather workshop. It is a test of patience with the need for a delicate touch. 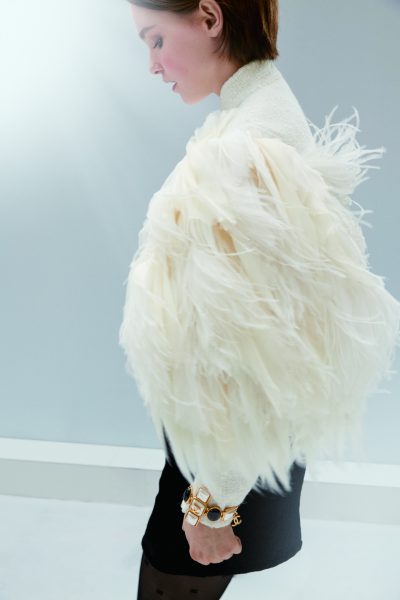 In addition to crafting flowers, Lemarié also does featherwork. The sleeves on this outfit (look 60) are made of faux fur with ostrich feather pompoms and silk chiffon, and take nearly 200 hours to make. Before visiting the ateliers, I did not realize that the laborious craftmanship associated with haute couture is also used on ready-towear items. (Photo credit: Benoit Peverelli)

Chanel’s collections are as much about clothes as accessories. To see how the season’s costume jewellery line is produced, I pay a visit to Patrick Goosens at the southern end of the complex. He is the son of the late Robert Goosens—who had a close relationship with Coco Chanel—having used his expertise in transforming bronze, rock crystal, wood and glass paste into exceptional jewels, adornments and decorative objects.

His design philosophy “clicked” with that of Coco Chanel in many ways. For example, there is no fear of mixing “high and low”. Chanel revolutionized how ladies accessorize their outfits by making costume jewellery a fashion statement that can be mixed with heirloom pieces, and Goosens was not afraid to set precious gems like emeralds in silver or goldplated pieces. 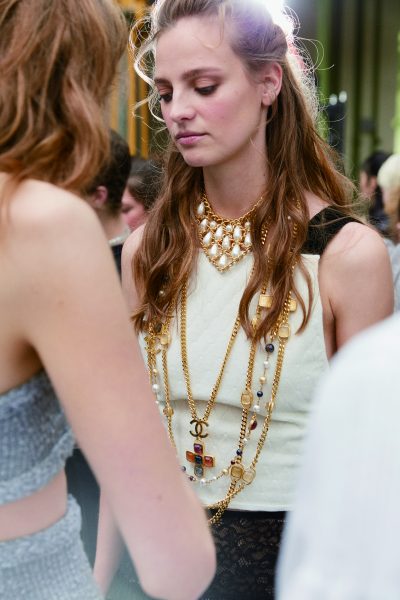 While some people might think that costume baubles are not as finely crafted as high-end jewellery, the artisans at Goosens will beg to differ. In fact, many of them came from Chanel’s high jewellery workshop, where they honed their classical jewellery-making skills, and are now applying their savoir-faire to make more expressive pieces, like this necklace with a 24-carat gold-plated cross with coloured crystals and pearl cabochons for the Fall-Winter 2020/21 Ready-to-Wear collection.

After showing me how each costume jewellery piece for the runway collection is molded by hand, Goosens leads me to a larger workshop, where three goldsmiths are setting a giant brass wreath on top of a convex mirror. In addition to jewellery, he also produces decorative furniture pieces, and this particular work is destined for the new Chanel high jewellery store in Paris.

With natural rock crystal flowers and gold-plated sheaths of wheat, it will be like a huge piece of jewellery for the wall.
Lesage, LeMarié and Gossens are just three of the many métiers houses behind France’s most prestigious runway collections. There is also Lesage Intérieurs and its École de broderie d’art, the Montex atelier and MTX, its decoration department, the shoemaker Massaro, the hatter and milliner Maison Michel, the pleater Lognon, the grand flou atelier Paloma and the lingerie and swimwear maker Eres.

In order to provide a hub for creativity and an ideal setting for the creation of their masterpieces, Chanel is building Le 19M, a 25,000 squaremetre complex at the Porte d’Aubervilliers to house some 600 artisans from the 12 ateliers. 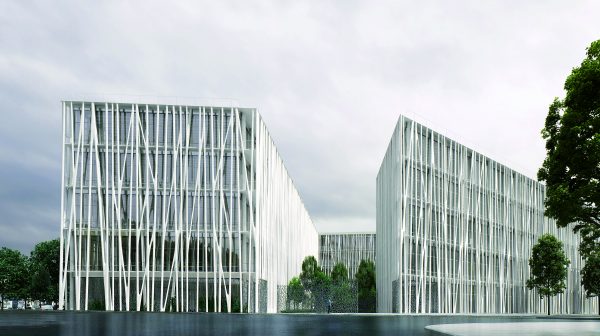 With Le 19M, Chanel continues to preserve and develop the savoir-faire of the Métiers d’art that began in1985, with the acquisition of more than 30 Maisons d’art and manufactories that represent about 5,000 employees, serving creation at Chanel and other major names in fashion.

The “M” in the name stands for many things: the French word mains for hands, mode for fashion, métier for craftsmanship, maisons for houses and manufactures for factories. The numeral 19 stands for the Parisian arrondissement where Chanel is situated, and it is, of course, one of Chanel’s emblematic numbers. It celebrates the birthdate of Coco Chanel, which was Aug. 19. Structural work was completed last October, and the artisans are expected to move in next July, where they can be close to the creation studio at Chanel, as well as the other fashion houses that rely on their skills.

BEHIND CHANEL’S ICONIC TWEED
The love story between Coco Chanel and tweed began in the 1920s. In 1996, led by a desire to diversify the activities of the House, François Lesage established a textile atelier. Two years later, he started proposing tweeds to Chanel for its ready-to-wear collections. 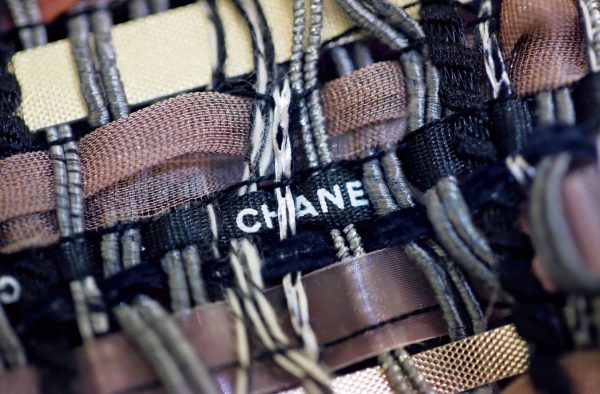 Borrowed from menswear, the original woolen fabric takes flight in every imaginable material at the house of Lesage for Chanel. Whether in leather, plastic, ribbon or zipper, each piece of fabric is woven and finished by hand. It takes a full day just to set up the loom, and an eight-by-eightinch piece could take more than 15 minutes to produce.

Since 2008, the house of Lesage has been inventing new tweeds for the Haute Couture. These sophisticated assemblies of the most diverse threads reflect an extraordinary savoir-faire. 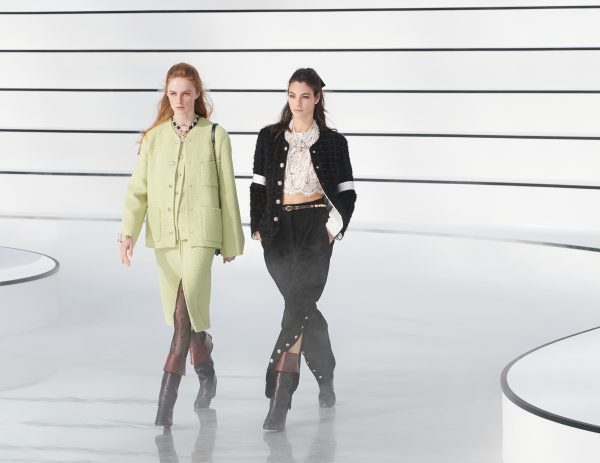 For the Fall/Winter 2020/21 Ready-to-Wear runway show, the tweeds woven by Maison Lesage combine velvet with metallic threads and organza ribbons in a subtle play of contrasts between materials and textures. This tweed jacket is composed of black chenille, whose velvety texture is in contrast to shiny fringes. (Photo credit: Benoit Peverelli)

The Vocabulary Of Style